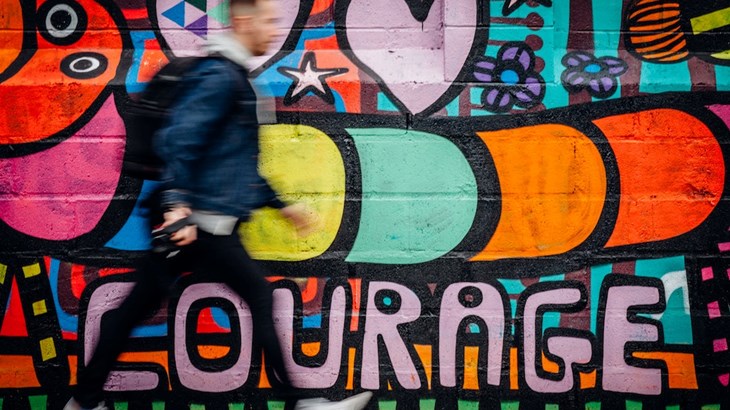 EPISODE 4: A PLACE WE CAN FIND COURAGE

No brain exists on its own. When we are feeling especially low and transparent, thriving can require others, and in particular their courage.

My daughter Zanna is a remarkable dancer. Once, before she went on stage as a young girl, she came to me and said how nervous she was. I could see the anxiety in her eyes, in her body’s posture, even in the colour of her face. Not only was she afraid of what might happen, it seemed she was also afraid of the fact that she was afraid.

Afterall, aren’t we supposed to be confident? Aren’t we meant to ‘make decisions’ and ‘stick to our guns’ come what may?

Our society focuses a great deal on confidence. Schools try to teach it, parents reward it, coaches punish you if you don’t have it, businesses pay you more if you fake it.

The logic is that confidence engenders success. But does it?

Ironically, research has shown that confidence can engender exactly the opposite: Poorly considered decisions and thoughtless actions that can create harm. Because when we’re confident we often forget to ask questions.

So I said to Zanna: “Yes … I understand that you’re scared. You’re smart! … What you’re doing IS scary … since it could all go wrong. BUT … what’s AMAZING to me ... and what I’m so proud of … is that you’re going to do it ANYWAY!”. That IS remarkable.

That’s courage not confidence, which is so much more interesting.

Stepping forward knowing that you’re likely to fail, stumble, fall or head in the wrong direction, that’s powerful. Zanna had (and has) the courage to step forward. It was her brain that was scared, because it knew - correctly - that she could fail … publicly.

And failure is failure!

To fail is hard. To do so publicly is to risk ridicule and even exclusion. No matter how often we attempt to rebrand failure as … “failing forward” ... or that “there’s no such thing as failure”.

Failure exists! It hurts! And it’s meant to!

The brain requires feedback. Without feedback there is no learning, much less existence (see my previous blog about the riots). The pain we feel when we fail is a perception that helps us learn that an action, idea or thought might have been ill-judged, wrong or hurtful (accidentally or otherwise). To ignore the feedback would prevent the possibility of growing from it.

Courage is to have the strength to engage with the feeling of ‘failure’ and to be humbled by its inevitability, while remaining indomitable in the face of it.

This is the route to understanding, which can lead to a healthier optimism.

And yet, we are so often told …

… by many ‘Positive Psychology’ practitioners, ‘Gurus’ and ‘Wellness Coaches’.

It is well known that smiling, and having an ‘optimistic outlook’ on life more generally, are good things to do: Those who score high on measures of optimism have increased self-esteem, and can even live longer, healthier lives. This is partly because optimism is associated with the release of neurotransmitters (dopamine and serotonin) that lower the body’s stress-response to conflict. Endorphins, our natural painkillers, are also released when we smile and feel optimistic.

Given these well-quantified effects, fostering optimism is clearly important for increasing personal and social wellness, especially in times of increasing corrosiveness, and where young people face a constant barrage of highly polarising, caustic views from social media.

Ironically, though, the kind of optimism that is typically encouraged can actually decrease personal wellness and resilience, and can even block others from thriving.

Because of how it’s measured.

The predominant measure is this: When something bad happens, the ‘optimist’ believes that it will be ‘short-lived’, it will not impact the rest of their life, and ‘it was beyond their control’ (and therefore usually someone or something else’s fault). Conversely, when something good happens, the optimist believes exactly the opposite ... that it will be ‘long-lived’, it will affect the rest of their life, and it’s because of them. This is measurably true! People who feel optimistic typically respond in this manner.

But it’s also the case that this kind of optimism, which has been strongly cultivated in our culture and businesses, can also increase ignorance, self-denial, narcissism, and even result in deep emotional trauma - and not only for the ‘optimist’, but for others too.

So, in times of uncertainty, an optimism that is predicated on ignorance is not what we need, nor the projected self-confidence that it inspires.

It’s courage and compassion that are essential.

To those we have looked to for centuries … until recently. To those who are some of our greatest heroes. To those who personify courage in their existence, and who have a need to give compassion and care.

To those who we too often hide away … and not by their choice. But by our choice. A choice that’s not in their service. But in the service of hiding from the consequence of the fact that life is cyclical.

Those with age and openness.

By openness, I do not mean the kind of openness that we often like to celebrate, the kind that is captured by Personality Profile Tests: Extroversion. An extrovert is - by definition - a person who is open to ‘new experiences’. This is an important kind of openness to be sure, which is commonly associated with adventure and ‘liberalness’.

But here I’m referring to a different, potentially more powerful, transformative and inclusive kind of openness:

Being open to letting go of the meanings of past experiences.

It’s very much possible to have someone who is both open to new experiences, but intransigent to letting go of the meanings of past ones. I call them ‘Conservative Liberals’ (e.g, where the Guardian becomes the bible, and not a source of information and/or opinion to be questioned … as is the Telegraph). Conversely, it’s equally possible to have someone who is less desiring of new experiences, but also able to ‘let go’ of the meanings of the experiences they’ve had. I call them Liberal Conservatives. For me, Liberal is less about where you start from, and more whether you’re willing to move from wherever you start.

Since your brain will never stop moving. What changes is the word we use to describe it. When we are young, we call it development. When we are older, we call it aging. As if one kind of change is generative and the other is degenerative. This distinction is not always the case. The brain just changes. The question is whether you will take agency and ownership of that change. Since, like fine wine, the way the brain changes with time can actually be an ‘improvement’.

For instance, it was once thought - surprisingly recently - that one’s personality was fixed. That the ‘Big 5’ traits could not change with time. But they can, and often for the ‘better’. For instance, longitudinal experiments have shown that the following personality traits can actually get stronger - on average - with age:

Equally, the ‘Dark Triad’ of traits can diminish with age:

These are good changes. Important changes that can add significant value to others, as well as one’s self.

But there are also other changes that happen with age. One of them is fear. Fear and anxiety typically increase as one’s brain gets older. This helps explain why older societies tend to be more religious. It’s intuitive as to why.

As we age, we accrue experiences that directly and increasingly illustrate that - statistically speaking - ‘dying is easy’ because there are so many ways to do it. It’s staying alive that’s hard. So by the time one is 70, 80 or 90 years old (or much, much younger depending on one’s life experience and - critically - how one responds to their life’s experiences), there are countless times that have been encoded in the brain that tells itself ‘...getting out of bed is a bad idea’ … quite literally: When someone at this age falls and breaks a bone, the probability of death within the next 12 months increases by over 30% … even after the bone heals. The risk of falling has twice the risk of death as does COVID for those who are 80+. Moving in body and mind can be dangerous enterprises.

In contrast, the young (including those at 52 - such as myself) know a great deal less. We are more naive, with a smaller database of experiences. Our perceptions of risk are different because our assumptions and biases are grounded in our more limited experiences. What’s more, the brain’s of the young also have the ability to ‘extinguish’ fear faster.

You see, when we experience a ‘fearful stimulus’, the area of your brain called the amygdala becomes more active. And that increase in activity is associated with ‘being afraid’. But then, shortly thereafter, another part of your brain (one of my favourite regions) called the prefrontal cortex kicks into action and inhibits the activity of the amygdala, extinguishing that perception of fear. The ability for the prefrontal cortex to inhibit the amygdala can be more plastic and even faster for young people than for older people. Which means fear for elderly can linger.

Why am I saying this?

Because I want you to feel (not just ‘know’) how remarkable those people are who have been living life for 70, 80, 90 years - or indeed anyone who has had objectively serious, continuous traumas in their life at any age - and yet remain open. They are some of society’s greatest heroes. They are true misfits: Despite all the evidence about the real dangers of the world, they choose to move both physically (when possible), and - more importantly - mentally and emotionally. They have the openness and humility to let go of what they thought to be true before. We should celebrate these heroes in our midst, since that’s where the courage of wisdom lives.

They are the ones we can look to in times of uncertainty, as a dear friend of mine recently did in her short film: They Saw The Sun First. Please watch it here.

Another dear friend, Duane Michals, who at 87 years old, is one the world’s greatest living photographers. He recently told me that - at 87 - he is more creative than he has ever been before. During this time of COVID, he is finding deep insights and creating content that continues to question, challenge and even laugh at our assumptions and biases. How? Because - he tells me - with age he knows less and less and less but understands more.

And in doing so … he continues to dance …

So … today … might I suggest that you think of a person in your life who has age and openness, and call them ...

(If this or any of our blogs are of use to you, please do share them since science - and ideas generally - only have value to the extent that they raise awareness) 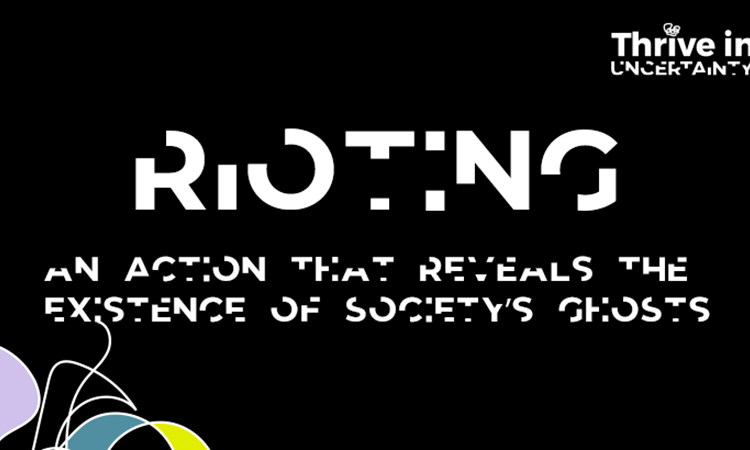 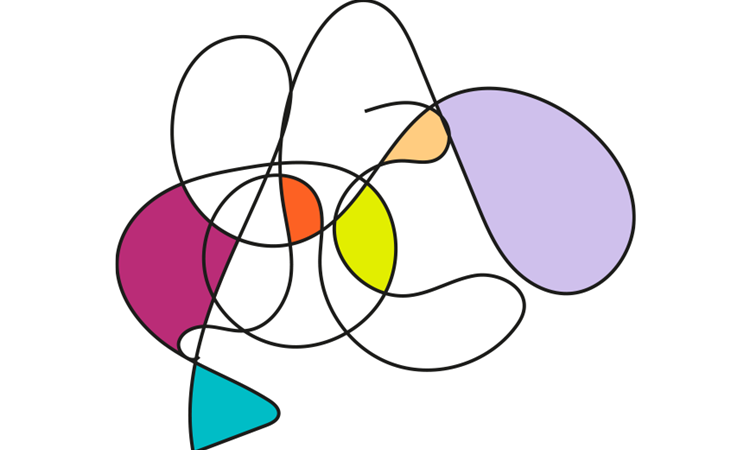 EPISODE 2: PROACTION IS A KEY FOR THRIVING IN UNCERTAINTY 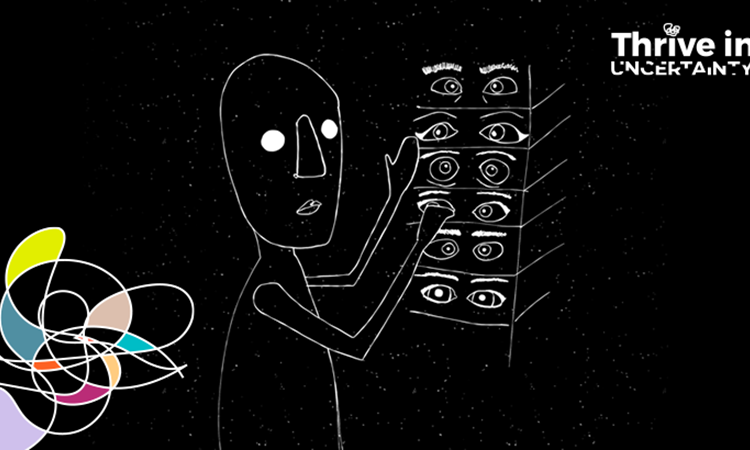