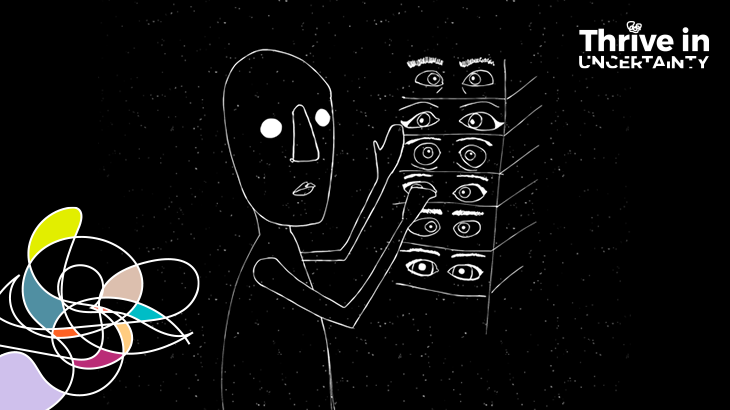 This blog is a transition from adapting TO uncertainty to thriving BECAUSE of it.

If you’ve read the previous blogs in this series (Adapt to Uncertainty), you will have read why  the first step to contending with fear is understanding. Since, understanding creates the possibility of choice.

The prefrontal cortex is the most recent innovation of our brain’s evolution. It evolved to help us deviate away from the more automatic, reactionary perceptions of panic, denial and anger to more thoughtful and considered behaviours.

Like other animals, we too are drawn to shiny objects: Our eyes move predictably. This is because we reflexively ‘look at’ what neuroscientists call ‘salient stimuli’: High contrast edges, movements in your periphery, etc. Such ‘stimuli’ had evolutionary significance. And because you are an evolved being, you reflexively look at the same stimuli that your ancestors also found salient millions of years ago.

Naturally enough what your eyes focus on determines what the rest of your brain sees. For instance ....Below is a video. Before you start it, notice its white X and grey frame. Also notice the intersection of two bars, as well as the four intersections where each bar meets the grey frame. Once you start the video, I’d like you to do two things. First, let your eyes follow the intersection at the middle of the X. Not surprisingly, you’ll see an ‘X’ moving back and forth. Then, I want you to shift your gaze to where one of the bars meets the edge of the grey frame … and follow it with your eyes. What is remarkable is that the same two bars, which previously appeared to move together back and forth, will now suddenly appear to move up-and-down in opposite directions!

Your brain is shifting between two completely opposite kinds of motion depending on where you look! And remember, we’re just talking about the motion of two bars: What is true at the simplest levels of perception is true at all levels of your perception.

To make that point stronger, here’s another, more complex stimulus: A spinning diamond. Once you start the video, look around it, blur your eyes, blink from time to time, and most of you will notice that its direction of motion will suddenly flip from spinning in one direction to spinning in the opposite direction!

This is what you’re doing when you dream. Your brain receives activity from different parts of your brain and then creates - out of necessity - a coherent narrative from that unique, often incoherent amalgamation of activity.

One day he makes a clear statement of ‘injecting disinfectant’ as a possible means for treating COVID (to be clear, the sentence that you just read is not a subjective claim, nor a judgmental  statement; it’s simply a statement of measurable data). Then, the next day he - in what I describe in Deviate as ‘remeaning’, denies the previous meaning, and ‘remeans’ the statement as ‘sarcasm’. And those whose brain’s have incorporated Trump’s identity as their own will focus their eyes and attention onto the information that perpetuates the lie in order to maintain their brain’s coherence. To do otherwise would create uncertainty, which their brains (and all of our brains) try to avoid (for reasons explained in the previous blogs).

This is NOT unique to the Trump Administration, or to Trump supporters or anti-Trump ‘supporters’. We’re all doing it … from how we direct our gaze inward to how we direct our gaze outward … we’re all trying to maintain a perpetual coherence that decreases the uncertainty of our own perceptions of self, others and the world! The scenes of a movie aren’t shot randomly. A Director uses the camera to ‘direct’ your attention to the elements that they believe will create a certain coherence in your brain, which we call narrative. When this strategy is used in ‘Film’, we call it art. When applied to politics, we call it propaganda.

What is essential is to know that it’s happening, and that it’s happening TO YOU BY YOU. Since it’s only in accepting this physiological fact of your brain that you have the chance to choose to break old perceptual coherences - or not (indeed, you might prefer to remain in a specific illusion). This is Neo’s Choice, when offered the ‘red’ pill or ‘blue’ in the film The Matrix.

The red pill is effectively a prefrontal stimulant. The blue pill is a prefrontal inhibitor. Will he take ownership of what he looks at, or will he look away from what was previously obvious? Will he activate his prefrontal?

Since, what you look at reveals WHO YOU WERE;

But, what you choose to not look at, reveals WHO YOU WILL BECOME.

And that is where agency lives.

While your brain’s number-one aim is to stay alive, staying alive for extended periods of time requires DEVIATING from the obvious.

But to deviate well and to maintain that deviation is hard in a world that rewards self-importance, conformity and ‘being right!’. And yet almost nothing interesting you’ve created began with ‘knowing’. It began with Not-Knowing. It began with a question (as do all quests - aka adventures).

So ... if you have the courage to truly see and listen, then you will have received a gift: The gift of potential awareness … a gift of seeing the assumptions, beliefs and priorities that guide you.

Many - if not most – choose not to look at their own expectations. Because as soon as you look, your brain will need to do something about what it sees in order to maintain coherence. And if it doesn't like what it sees, it may choose to deny, ignore or lie about the evidence. To engage with what you see takes you to the very place we your brain evolved to avoid … to a place of self-doubt and short-term stress, since the greatest threat to oneself is the uncertainty of the self.

But you already know how hard it is to look away from the obvious. And if you didn’t, next time you’re in a traffic jam, and you come upon an accident, try NOT LOOKING. Even now, even in your imagination of this scene, you will feel how difficult it is to look away.

But you can. You can choose to look away from panic buying ... from ridiculing your partner, friend or child ... or even from derogatory statements of yourself to yourself. While these might all be natural responses some salient (or ‘trigger’) stimuli. That’s not the point.

The point is that these responses are generated by circuits that you laid down in your brain from your past interactions with the world. But they are only currently you! The first step to culling them is to JUST STOP.

Overcoming our evolved and inherited reflexes is so essential for our survival, that we evolved a tool for doing so: Your prefrontal cortex. And we can become better at doing so.

This is what meditation is for: it’s an exercise (or practice), no different from going to the gym, but for your brain. When you meditate … you increase the activity of your prefrontal, which in turns inhibits ‘lower-level’ circuits. This not only reduces your amygdala’s fight-or-flight responses to stress by reducing cortisol, it also increases oxytocin which creates feelings of empowerment, empathy and generosity. This, in turn, strengthens your immune system and even your brain’s ability to be agile in its thinking.

You strengthen you. In doing so, you become wiser. Indeed, wisdom ARISES FROM UNCERTAINTY - not despite it.

By engaging PROactively in the world, and choosing not to avoid pain, distress and conflict, and doing so with humility, curiosity and courage in order to create understanding, you actually increase the complexity of your brain’s connectome. Indeed, much of my research as a PhD student was exploring how a more active brain releases more ‘trophic factors’, which are chemicals that brain cells need to grow and survive. The result is a brain with a higher dimensional search space. Put more intuitively, a more complex brain has more ways of thinking. Which is why a more complex brain is a more adaptable brain.

In nature, more adaptable systems thrive (whether that system is a person, culture, species, ecology, business or government).

BE INTENTIONALLY PROACTIVE in this time of COVID (and beyond). Practice it. Exercise your prefrontal. In doing so discover what uncertainty it really is: The only place where your brain can learn to walk through life with a tilt in order to not be blown over by the future head winds of life. Uncertainty is where you can learn to thrive.

In our next blog of this series, we will explore the specific ways in which you can apply proactivity.